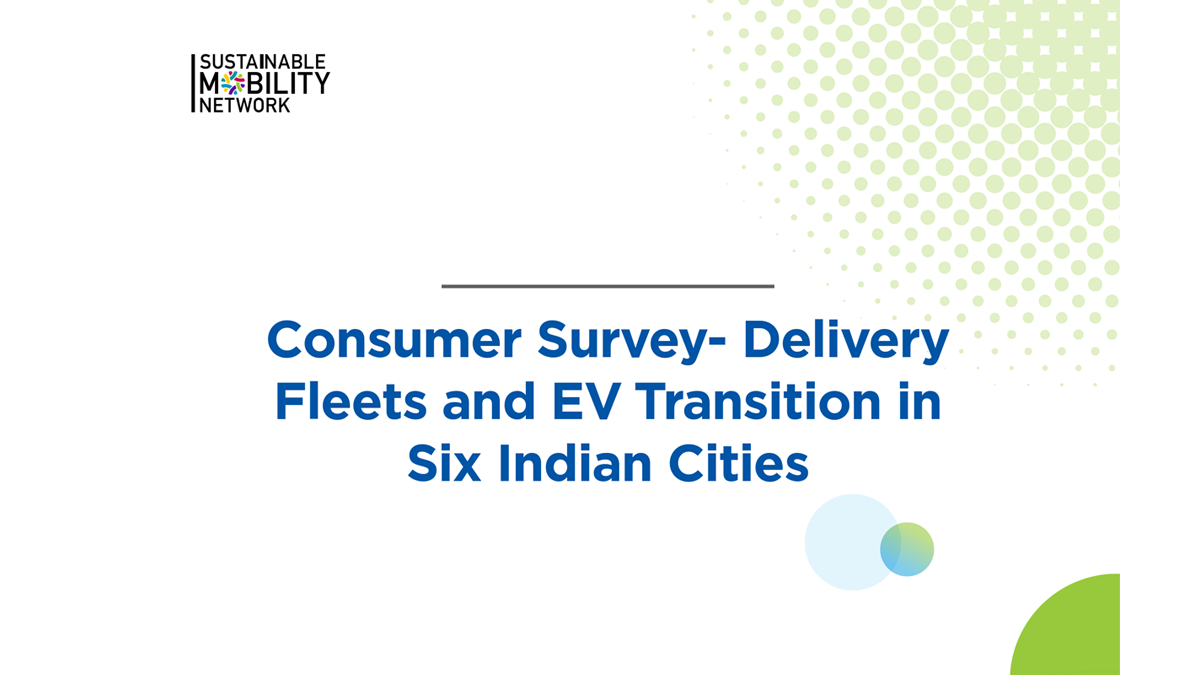 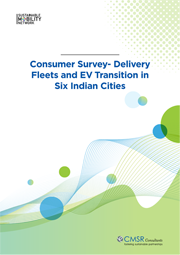 A new consumer survey commissioned by the Sustainable Mobility Network and conducted by CMSR Consultants shows an overwhelming desire from consumers to see accelerated EV transition from e-commerce and delivery companies in response to air pollution and climate change.

The survey conducted among 9048 consumers across 6 major cities- Mumbai, Pune, Delhi, Kolkata, Bangalore and Chennai- shows that 78% of all respondents attributed last mile delivery vehicles as one of the reasons for rising air pollution in the cities, with 67% of all respondents supporting  a switch to EV vehicles by the delivery companies to reduce  air pollution and mitigate climate change.

"E-commerce, food and grocery/ hyperlocal deliveries are a rapidly growing segment in India " said Gajendra Rai, Director of CMSR Consultants. “Tier 1 Cities comprise a core market for most of these delivery companies, so our survey across the 6 Indian cities is highly indicative of overall consumer perceptions of the companies and their current use of delivery vehicles. We have also tried to ensure that the maximum respondents (94%) are from the 18-45 years age group, spread across the city  who again represent the core user base for the companies.” he further added.

The survey, primarily conducted offline (89%) through on-ground interviews, also finds that an overwhelming majority  of respondents (93%) believe proactive action and transition by one company can encourage other companies and create rapid change in the sector.  The respondents also stressed the need for a socially just transition of their delivery fleets by companies with 38 percent stressing that companies should either lease or purchase electric vehicles for their delivery partners/workers, 31 percent respondents saying companies should provide financial incentives to delivery partners for buying electric vehicles and another 19 percent stating that support should be provided to the delivery partners to retrofit their existing delivery vehicles.

“All of us are impacted by poor air quality, and the impacts of climate change. The survey shows that people want delivery companies to clean up their act.  The delivery companies should be supporting the delivery partners to go electric which will also help them earn more and protect them from rising fuel costs”, remarked Divya Narayanan, Campaigns Director from Jhatkaa.org.

The key companies identified by consumers as part of the survey include Amazon, Flipkart, Swiggy and Zomato as the most frequently used, with the other companies specifically mentioned being grocery/ hyperlocal and logistics companies like Bigbasket, Dunzo, Blinkit/ Grofers, JioMart, MilkBasket, Bluedart, Fedex, Gati etc.

Atul Mudaliar, Head of Business Initiatives at Climate Group, said,”It is time that all e-commerce and food companies find cleaner ways to deliver goods. The survey finds that two out of three consumers acknowledge that the goods they purchase add to air pollution and are responsible for climate change in some way. Consumers believe that companies can do more by proactively switching over to electric vehicles for delivery. While prominent companies like Flipkart and Zomato have announced a massive shift to 100% electric vehicles by 2030 in line with EV100, state policies in India have now started introducing mandates. Soon, delivery companies will have no choice but to change. Most brand-conscious businesses will respond to consumer opinion, the only question being when and how soon - the report is categorically clear on what consumers want."­

The survey also finds that people in the cities of Mumbai (66%), Pune (78%) and Delhi (78%) have said they would prioritize purchases from companies which make commitments that are in line with state government targets to rapidly decarbonize their fleets.

Maharashtra sets a 25% target for electric vehicles among e-commerce, delivery and logistics service providers in the state by 2025, while Delhi’s draft Motor Vehicles Aggregator Scheme sets EV transition targets for e-commerce and last mile delivery aggregators along with a 100% EV adoption target by April 1st, 2030.

“The consumers are in support of policies by state governments that set targets and mandates for the transition. We need the e-commerce and delivery sector to respond to the overwhelming public desire for change. This is also in line with the direction set by Niti Aayog. It is critical that businesses work closely with our governments to address their last mile and overall  emissions and commit to clear, time-bound plans to reduce them,” added Divya Narayanan.