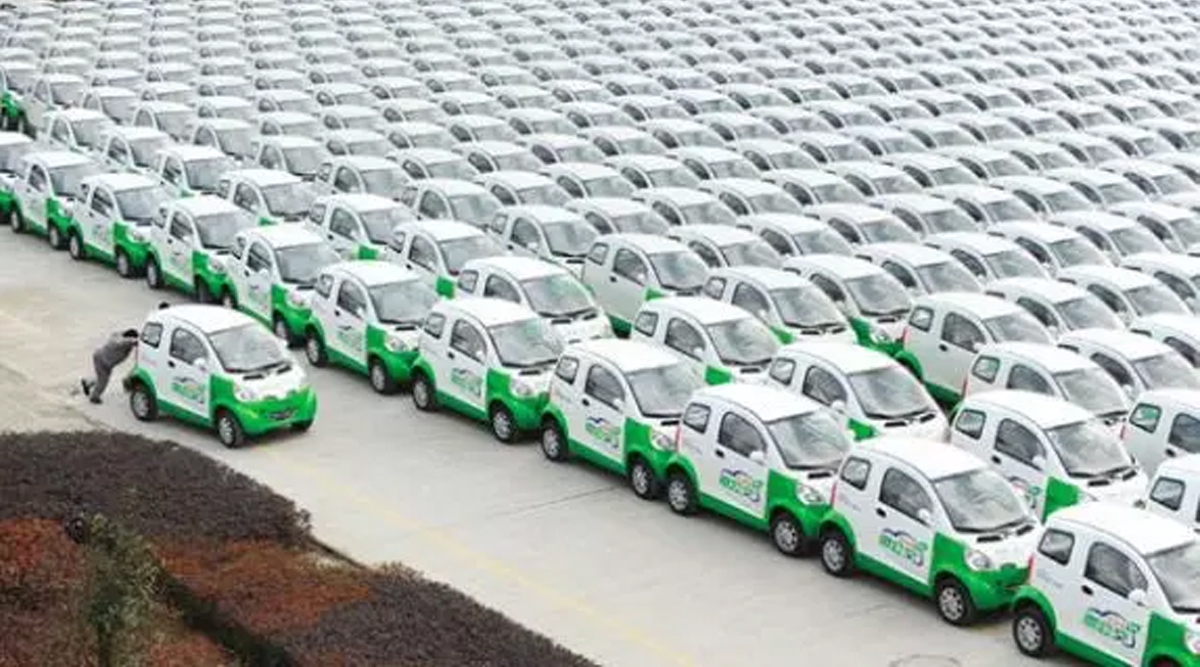 Actions from policymakers, manufacturers and consumers is showing results, with 1.7 million barrels of oil saved per day in 2022 through EV adoption, 3.8% of total demand.

Today marks Solutions Day at the United Nation Climate Change Conference, COP27, being held in Egypt, where world leaders have come together to find pathways for achieving collective climate goals and building on the outcomes from COP26 last year. Transport decarbonization was the key focus of the day at the global conference, with the launch of the Accelerating to Zero (A2Z) coalition, a step up from the Zero Emissions Vehicle (ZEV) Declaration created at COP26. A2Z coalition aims to secure more ambitious commitments for a global transition to zero emission transport. More than 200 stakeholders including national governments, state, city and regional governments, global and regional manufacturers, fleet owners and operators, investors and financial institutions have joined the coalition that together work towards ensuring that all sales of new cars and vans are zero emission globally by 2040, and by 2035 in leading markets. India too has joined this coalition and committed to this target.

On this occasion, BloombergNEF released a special report highlighting the growth of global transport electrification world over. Its findings show that the rise in electric vehicle sales, and the resultant reduction in sector emissions and oil savings, is truly one of the biggest climate success stories since last COP in 2021. In total, 66 governments world over are now targeting a phase-out of new internal combustion vehicle (ICE) sales, and automakers’ ICE phase out commitments now represent nearly 30% of the global vehicles market. 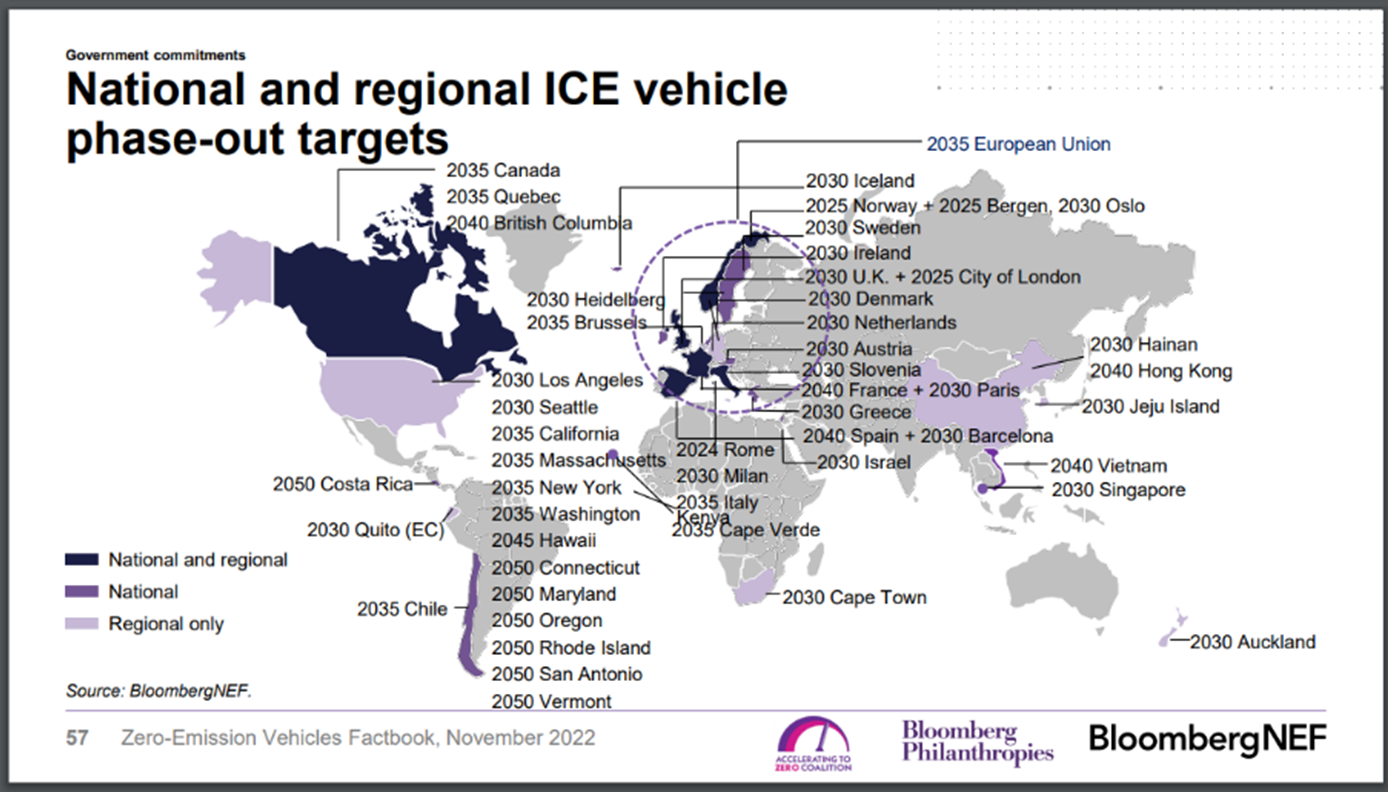 Here’s a snapshot of the growth of the global electric mobility market in 2022:

Adoption of EVs and Fuel Cell Vehicles has saved almost 1.7 million barrels of oil per day in 2022, which is about 3.8% of total demand. It has also eliminated 152MtCO2 per year of the global road transport emissions.

Avoided oil consumption from EV adoption has more than doubled from 2015-2021, up from ~725,000 barrels of oil per day in 2015. In 2022, two- and three-wheeled EVs are expected to account for 61% of the oil demand avoided due to their rapid adoption and large fleet, particularly in Asia.

In the last decade, lithium ion battery prices have fallen by 89%, leading to a reduction in upfront cost of electric vehicles. Global lithium-ion battery manufacturing capacity has increased 38% since 2021, from 540GWh to 806GWh.

Annual investment in home and public charging in 2022 is expected to reach $28.6 billion and cumulative investment in the sector will likely pass $100 billion in 2023. EV charging investment in 2022 equals that of the previous five years combined. By end of 2022, there will be 9.6 million home EV chargers and 2.7 million public chargers installed globally.

In the last two years alone, global automakers have collectively committed to sell around 43 million EVs per year by 2030. Automakers with planned phase-outs of combustion engines now account for 30% of the global auto market.

Supportive policies have been key to this growth

The report also assesses the evolution of national and regional policies and highlights a shift from subsidy-based policies to market-based mechanisms in countries leading in electric vehicle growth. Most leading countries like China, Europe and the United States started with direct purchase incentives in the early years, which lower the upfront cost of an EV for the consumer. These were highly effective in incentivizing early EV adoption, but prove expensive for governments in the long run. Supply side policies, like fleet wide fuel economy targets, are gaining importance, particularly in Europe and China which have some of the most stringent fuel economy targets which automakers must meet. This strongly induces automakers to launch new EV models and make them attractive to consumers.

One of the most aggressive regulations has been introduced by the European Union in October this year, which bans the sale of ICE car from 2035 onwards. As of that year, new cars sold in the EU must be zero emissions only. An intermediate target of 55% reduction by 2030 (compared to 2021 levels) for cars has also been agreed, which would mean at least 60% new cars in 2030 will have to be electric. Such regulations and targets are playing a key role in pushing road transport carbon emissions towards zero.

The United States third position in the global EV sales ranking is a result of dramatic changes in its EV policies in the last year. It announced three major pieces of support on fuel economy standards, charging infrastructure and the Inflation Reduction Act (IRA). The last, IRA, in particular has energized the US EV sector, with revised federal EV tax credits, a new user EV credit, incentives for commercial EVs and billions in loans and grants. As a result of this, the report predicts that the US EV fleet will be 20% larger by 2030 compared to previous forecasts. The IRA also has powerful incentives for battery manufacturing to speed up deployment.

While this growth is encouraging, the momentum needs continued support

National, regional and local governments must continue to raise ambition and implement stable, long-term policies that induce the growth of zero-emissions transport, and manage the phase-out of polluting vehicles. Particular attention is needed to support the transition to zero emission transport in developing economies. Over 40% of ICE cars on the road in 2035 are expected to be in emerging countries if no action is taken today. Stronger international collaboration and financial and technical assistance will be needed to accelerate ZEV adoption in these countries.