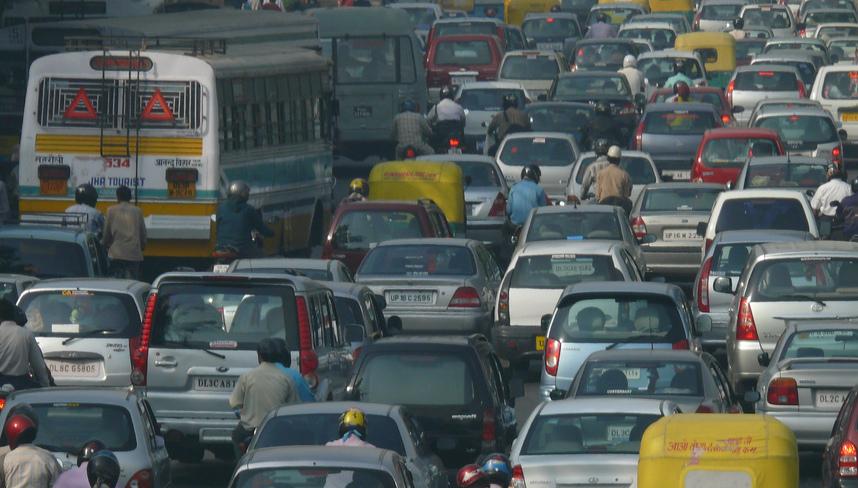 Air pollution has been front and centre in the India’s public conscience over the past two weeks, particularly in big urban nerve centres Delhi and Mumbai. Just as the country’s persistent air pollution malaise was ramping up, Prime Minister Modi took the stage at COP26. Among other important announcements the PM announced that India would undertake a goal of achieving a net-zero emissions by 2070. This would be done in part by cutting down by almost half the GHG emissions that is emitted in the country for every dollar of economic activity by 2030.

For the kind of widespread decarbonisation and air quality improvement that India seeks, a low carbon shift in transport will be crucial. Take for instance Delhi and Mumbai, which have been choked with poor air over the past month. Emissions from the transport sector contribute over 40% and 30% of the total in Delhi and Mumbai. And these statistics are by no means an exception in the Indian context and are likely to get more stark with CO2 emissions from India’s transport sector increasing at the fastest rate (among all oil consuming sectors) of more than 6% per annum.

India stands to gain hugely from transport electrification, as its benefits extend to reducing air pollution and associated premature deaths. India has some of the highest exposures to ambient PM2.5 and ozone in the world, coming from the emissions of its power and transport sector.

A recent analysis by the International Council on Clean Transportation has calculated that if India was to adopt an ambitious vehicle electrification target*,  it could reduce tailpipe emissions between 18 – 50% by 2040. Even under the pessimistic scenario in which electricity for EVs is coming from coal and gas, EVs would still lead to a net emission reduction in nitrogen oxides and CO2, with a marginal to no increase in PM2.5.

A subsequent analysis to assess the health benefits of large scale vehicle electrification reveals that this alone will lead to at least 16,700 annual avoided premature deaths in 2040, without considering the decarbonisation of the power sector. Value of Statistical Life calculations show these benefits in avoided health costs amount to $19.1 billion in 2040. If, along with transport electrification India also phases out coal and improves emissions of remaining coal power plants, it can lead to 70,400 avoided premature deaths. If nothing is done, India will record an estimated 4.9 million premature deaths in 2040 from air pollution.

“Electrification of transport has given huge reasons for optimism when it comes to controlling air pollution, but the switch to EVs also depends heavily on economic advantage that EVs bring to the table. Based on the numbers we’re seeing, the cost to consumers from electric vehicles are far lower than conventional vehicles. Consumers that are sensitive to prices, particularly in the two-wheeler segments, are and will continue to switch over to EVs. That’s a huge number of people which will really impact air quality. Operators of freight vehicles are also very price sensitive, and electrifying freight transport also holds immense potential for bettering air quality. Of course, these transitions to electric mobility cannot happen separate from the decarbonisation of energy sources that power EVs, so they will have to be seen as parts of the same composite problem for air quality gains to be maximised,” says Jay Asundi, Executive Director of C-STEP.

Today, the power sector is the largest source of air pollution, accounting for 68% of PM2.5. But in the absence of electrification for road transport emissions, by 2040, transportation will be the largest source of air pollution, given that India is already making steady progress to transform its power sector towards renewables. Therefore, focusing on e-mobility and increasing share of EVs is a critical requirement for a low-carbon economy and for better human health. *An ambitious vehicle electrification target is defined as 67% of new sales across all vehicle types to be EVs by 2030, and 98% of total new vehicle sales and production to be EVs by 2050. Medium and heavy trucks are assumed to be 100% EVs by 2060.